I never go to bed at the ‘normal’ time of 9-11pm. You see for years I’ve had Delayed Sleep Phase Disorder (DSPD) but then it turned into Non-24 (self-diagnosed). Rather than continuing to hide it and subtly work around it, I want to start spreading awareness to this somewhat rare Sleep Disorder of the Circadian Rhythm. Studies in the 1990s found that DSPD affected more than 1 in 1000 adults (about 10% of teenagers and about 0.15% of adults) are affected and Non-24 is even rarer at 0.03% instances. DSPD is similar to jet lag but is much longer-lasting. It can develop suddenly or gradually.

Delayed sleep phase disorder (DSPD), more often known as delayed sleep phase syndrome (DSPS) and also as delayed sleep-wake phase disorder, is a circadian rhythm sleep disorder affecting the timing of sleep, peak period of alertness, the core body temperature rhythm, hormonal and other daily rhythms, compared to the general population and relative to societal requirements. People with DSPD generally fall asleep some hours after midnight and have difficulty waking up in the morning.

DSPD is a neurological  sleep disorder in which a person’s sleep/wake cycle is delayed with respect to  the external day/night cycle. The person is unable to fall asleep until the wee  hours, typically somewhere between 2am and 6am, and sleeps correspondingly  longer in the daytime, often well into the afternoon.

People with Non-24 have more than 24 hours in their day. They fall asleep later and later each day, cycling around the clock over several weeks. The key to these disorders is that sleep times are not simply preferences. People with DSPD or Non-24 are unable to sleep except at certain times as dictated by their faulty internal clocks. (See more sleep disorder definitions here.)

Why not just go to bed earlier? DSPD people really are unable to fall asleep earlier. This distinguishes DSPD from being simply a “night owl” tendency, in which people prefer to stay up late and get up late, but are able to adjust their  schedules to normal hours. DSPD people are unable to shift their faulty body clocks. In medical terms, they are unable to entrain to a normal day/night  schedule.

As a child I would stay awake a little later then a ‘normal’ child would but it wasn’t anything that stood out. But in my teen years, I worked at the morning shift at Burger King usually 6am-2pm, then for a year I opened and had to go in at 5am – 1pm. It was pure torture. I couldn’t ever fall asleep at 9 or 10pm. At 19, I started working as a teller/bookkeeper at a bank and would need to get there and ready to work by 8:30am. That was better but still a struggle and was often late. I would set multiple alarms but shut them off in my sleep and wake up in a panic once I realize that I was late. That is the worse kind of terror!

Life finally got better in 2005 after I started my web design business at 21. With me setting my own hours, I unconsciously started letting my own body clock have its way.  It felt like I WOKE up in late evening and I was so much more productive at midnight. I fought against it but anytime I would go to bed earlier, I would just lay there and still not be able to fall asleep till early morning. To block out the daylight sun I used Eclipse Thermal Blackout Window Curtains and eyemasks then later Sleep Phones to block out noise and light.

For a couple of weeks, I even tried the unusual Polyphasic Sleep practice.

From Wikipedia: Polyphasic sleep is the practice of sleeping multiple times in a 24-hour period—usually more than two, in contrast to biphasic sleep (twice per day) or monophasic sleep (once per day).

That didn’t last long as once I did fall asleep in the 20-minute naps, there was no way I was waking back up.

I religiously tracked when I slept to try to understand it more.  Looking back at my Excel logs, from 2006-2007,  it shows that I was going to bed between 3-5 am but getting up at 11am-1pm. From 2008 -2013 I used the Sleep Tracker app from MedHelp and its shows that it moved forward, settling into going to bed at 5/6am then sleeping til 2pm. Now I use the Fitbit One‘s* Sleep Tracking and www.SleepGraph.com to visually see the trends.

Below is the results for the last 5 years. 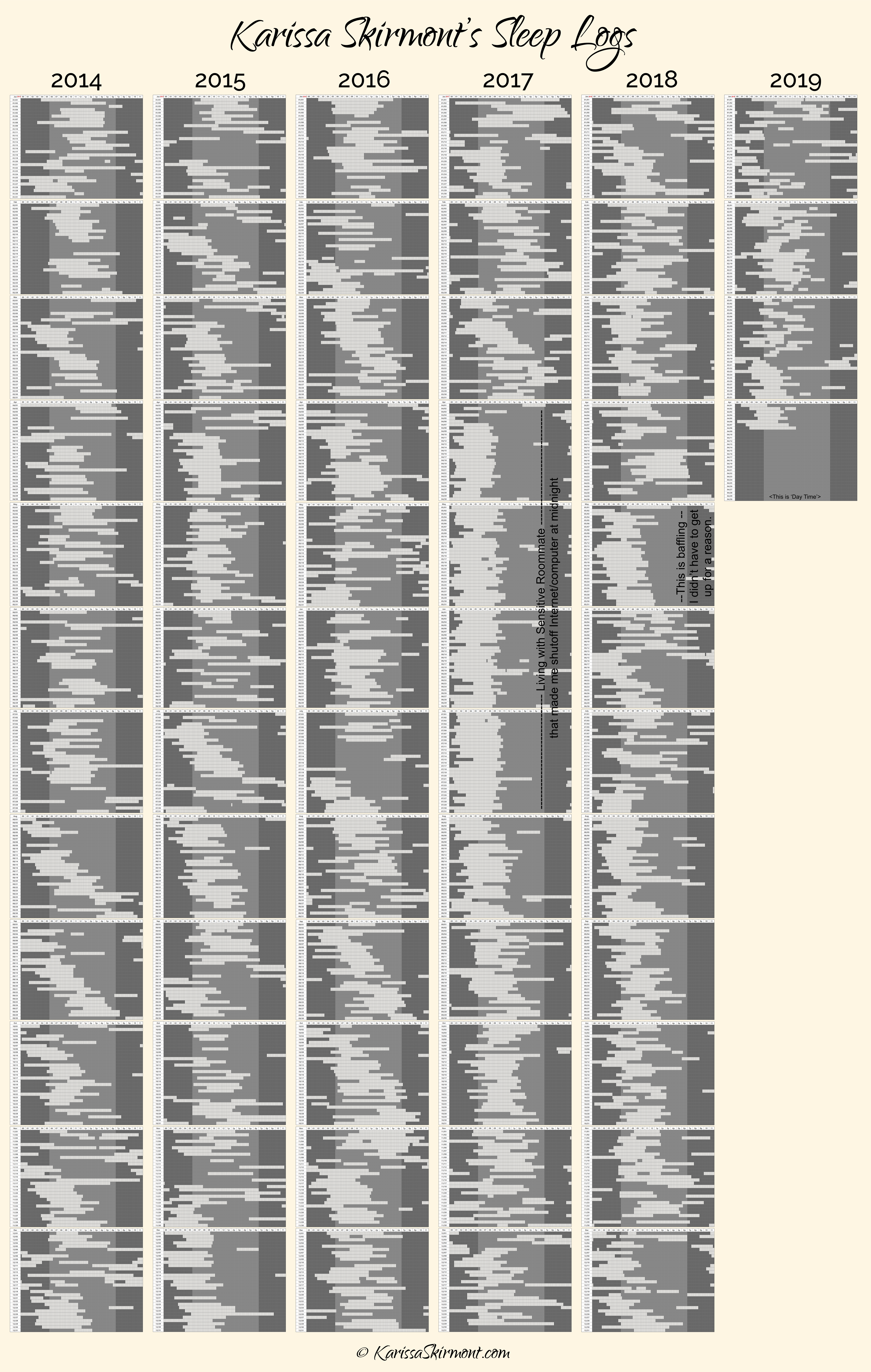 Now years later, its all over the place and turned into a combination of DSPS and Non-24 cycle. Each day I stay awake longer and longer and sleep longer and longer till I ‘walk my way around the clock.’  A couple days a month, I’ll just not go to bed for 36 hours – 48 hours, sleep for 12+ hours then skip another sleep cycle. This allows me to ‘reset my clock’ but its quite wonky and makes me feel really off. For the most part I just schedule calls & appointments in the afternoons to evenings and it all works out.

Lately, I’ve been researching it again and in reading stories/comments from people who have it and didn’t know what was wrong with them and have struggled and been negatively affected WAY more then I. Losing their jobs & relationships and having their self-esteem constantly taken a hit. So this is what prompted me to write about it.

In our society, “morning people” tend to be seen as industrious, wholesome, and productive, while “night owls” are often stereotyped as lazy.  This can be really hard on kids, who get unfairly labeled and do worse in school just because their sleep-wake cycles don’t conform.  And when we grow up, night owls can continue to be “punished” if we chose the wrong profession or can’t find an accommodating work environment.

Trying even harder to force yourself into a conventional workday can lead to chronic sleep deprivation and ruin your health! Treatment often does not work. When you cannot fall asleep before 4 AM, you need to sleep until noon or 1pm. You have a right to accommodations at school and at some workplaces.

My Sleep Logs from my Fitbit Tracker. You can see them here.

If you think you might have DSPS and consider it a problem, you should start to keep a sleep log so a doctor can evaluate your symptoms. This takes a few minutes every day. At least 2 weeks of sleep logs are needed to diagnose DSPS.

They say you should write down:

Here is a printable sheet that you can use.

Like I said above I now use the  Fitbit One* or you can check out the Fitbit Flex* if you like it on your wrist. Do note that as of Nov 2014 Fitbit does have the two new models coming soon that tracks your heat rate and Apple’s Fitness Watch is coming in 2015.

For simple tracking on your phone, I recommend https://www.sleepgraph.com.

Is this you? Share with me your experience in the comments.

Also there is a SubReddit: https://www.reddit.com/r/dspd.

Links to read and learn more:

Connect with me Socially

Get some Clarity from Me

If you want to talk to me directly you can call or text me at 816-396-5533. But the best way to get ahold of me is via email, which I can respond to at any time. Just use the form on the Contact Me page.