While I was growing up my dad was an over the road truck driver and my mom and I would travel with him sometimes. Over the years I’ve really covered some ground! Here’s a break down of what I remember from each of the 29 states I’ve been in:

Alabama – I lived there for 4 months.
Alaska
Arizona – Visited my Uncle there as a child.
Arkansas – We had family vacations in Bull Shoals.
California – Visited as a child and went to Disneyland then as an adult visited family and went to Universal Studios.
Colorado – My favorite state! Born and lived for 9 years 1984-1993. Love to vacation there.
Connecticut
Delaware
Florida – Visited family as a child in Daytona Beach.
Georgia – Visited a friend there in Atlanta.
Hawaii
Idaho
Illinois – My Grandmother lived in Chicago.
Indiana – My Aunt lived there and visited passing through.
Iowa – Been though when going to Omaha.
Kansas – Lived there for 8 years, 2011-2020.
Kentucky – Lived there as a pre-teen for 2 years, 1993-1995.
Louisiana – Drove through as a child but don’t remember it much.
Maine
Maryland
Massachusetts
Michigan – As a child, tried skipping a rock into Lake Michigan but it hit my mother in the head.
Minnesota – As an Amish Taxi Driver, I drove through Minneapolis and had breakfast.
Mississippi –   Drove through as a child but don’t remember it much other than the cotton fields.
Missouri – Uhhh been here many times, shopping in St Joe & Kansas City.
Montana
Nebraska – Lived there for 16 years, 1995-2011 & 2020>.
Nevada – As a child we went to an airshow in the desert.
New Hampshire
New Jersey
New Mexico – As a child, went on road trip there. Also part of 4 State corner.
New York – Been here on a truck driving trip with dad. I remember a car burning on the side of the highway.
North Carolina
North Dakota
Ohio – Family lived here, went to church camp.
Oklahoma – Passed through while driving to Dallas.
Oregon
Pennsylvania – Drove through as a child
Rhode Island
South Carolina
South Dakota – Drove with a friend to do a custody swap with her ex.
Tennessee – Drove through several times and visited Nashville.
Texas – Been to MK conventions in Dallas.
Utah – Drove through as a child, sat on a hill of salt in the salt flats.
Vermont
Virginia
Washington
West Virginia
Wisconsin – As an Amish Taxi Driver, I drove a couple to a funeral and stayed the night in an Amish home without electricity or even an indoor toilet!
Wyoming

Where have you been?

After designing the custom map above I found this site www.gasfoodnolodging.com/visitedstates/ that has a brilliant color coding idea:

So I used that strategy in my map above, just purple-fied it!

There is also this version from https://maploco.com/visited-states if you want it simple: 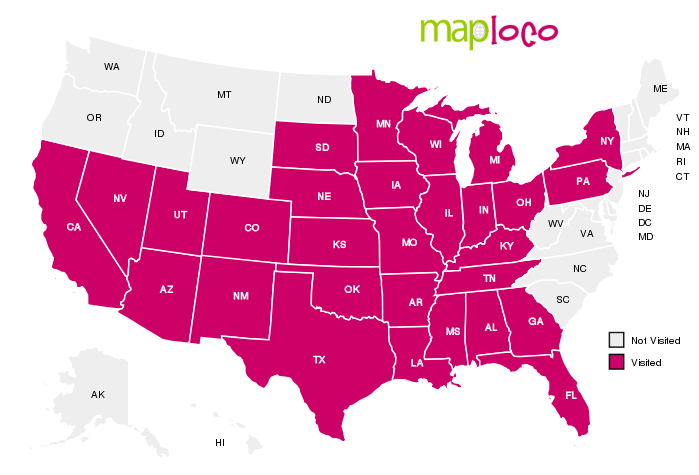 Create your own visited states map and share your link in the comments below.

Connect with me Socially

Get some Clarity from Me

If you want to talk to me directly you can call or text me at 816-396-5533. But the best way to get ahold of me is via email, which I can respond to at any time. Just use the form on the Contact Me page.